The 2022 Rooster Regatta was held in July rather than the normal May Bank Holiday, due to the Queen’s jubilee celebrations. It proved to be a great success with sunshine, a good social and some interesting racing.

With over a hundred social tickets and over 56 boats entered it was going to be a good weekend. The Regatta is a light hearted affair with some good racing, but also novice races, children’s competitions and a treasure hunt. It is as much a social event as a sailing one, and the bar did good business.

The Saturday racing was plagued by light winds, the first race started an hour late at 12pm, and at every mark it seemed the wind turned to create a beat, most got round within an hour. Jon and Nicola Willars took their Scorpion to first place in the fast fleet, followed by Chris Martin and John Tailby in a Scorpion. Peter Gathergood won the juniors, whilst Richard Mason took the first race in a Laser and David and Luke Evans were second in a lovely wooden Firefly. Gerry Ball  won the windsurfers with Ian Pilkington second.

It was so hot and the wind so fitful, that was it for the day. Ken Twemlow the Race Officer decided to try a novice race, for the ten novices entered but again it was a drift around a short course, won by Ted Anthill in a laser, with Ben Jones second.

So the bar opened and everyone enjoyed the shade on the balcony, and the odd pint of beer. The evening entertainment saw a professional BBQ and music enjoyed by the hundred or so members  from the keenest racers to the newest members. During the two days, for this not racing, there was a treasure hunt, duck race and bunting painting. Sunday saw slightly better conditions with a little more wind, which was steadier. Two races took place for the Commodore’s Cup. Chris Martin and John Tailby won both races and the overall Commodore’s Cup. Hayden Moore won the junior prize in an Aero. The fast fleet saw James and Phillipa Logans constancy pay off to come second in their RS400.

The slow fleet saw Ian Firth win a race, but it was Tim Rush’s constancy that paid off beating Stephanie Gunn by two points in the slow fleet, to win.

The Novices saw Ted Antill win both races with. Janes & Simon Ling in a Topaz second and Viv Weston and Adrian Jones third in their Scorpion.

Thanks to all the volunteers who made the event happen. Thanks to Viv Weston and James Logan for some on the bank photos. Thanks to Rooster for prizes. 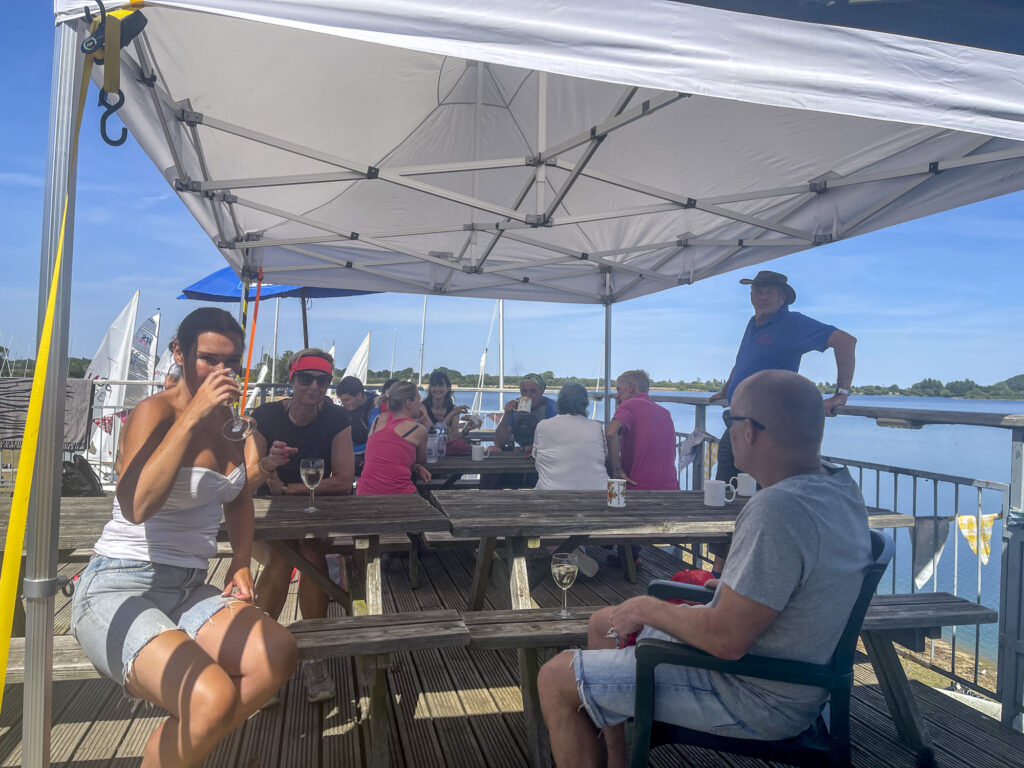